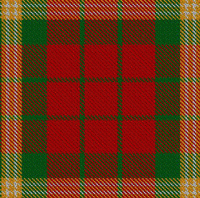 It came as a great surprise to us as we were forming The Clan Claus Society to find out that there was no registered Tartan for Santa Claus. How could this be we asked ourselves? We have all seen images of Santa Claus wearing a Kilt and even playing the Bagpipes before, but as we searched for a Santa Claus Tartan we came up empty handed.

So using an online Tartan Design Program we started the process of creating a Tartan for Santa. The design program link was posted on ClausNet.com and the fun began. After about three weeks of playing with the program Santa Kona put together the design contest.

Here is where the hard part began - we had so many great designs entered, picking one was almost impossible. So with the help of Santa Mike Reilly, ClausNet.com Founder, the decision was made to have two rounds of voting. In the first round all members of ClausNet would have two votes to cast for their favorite designs. The top four designs would then move forward to the final round.

In round two all members of ClausNet.com had only one vote to cast for their favorite design. When the voting was complete we had our winning design. We were proud to see it had been submitted by our very own Santa Bruce "Mac Claus "Arnold.

Our Tartan Claus of the North Pole is registered with:

Oh, I forgot to mention the Fabulous Grand Prize (beyond bragging rights) that went to the winner - a Dairy Queen Ice Cream Cake.