A Scottish Crest Badge, more commonly called a Clan Crest, is a heraldic badge worn to show one's allegiance to a specific Scottish Clan. Crest Badges may be worn by any member of a Clan. Even though it is the most common name, the term Clan Crest is a misnomer. There is no such thing as a Clan Crest. Modern Crest Badges usually consist of the Clan Chief's personal crest surrounded by a strap and buckle and the Chief's motto or slogan. Although "Clan Crests" are commonly bought and sold, the heraldic crest and motto belong to the Chief alone and never the clansman or clanswomen. Crest Badges, much like Clan Tartans, do not have a long history, and owe much too Victorian Era Romanticism, having only been worn on the bonnet since the 19th century. The original badges used by Clans are said to have been specific plants (Plant Badges) worn in bonnets or hung from a pole or spear. Who is entitled to wear a crest badge? A person does not need to be a member of a Clan Society to be able to wear a Crest Badge. Any clansmen or clanswoman has a right to it, not just Clan Societies and Clan Society Members. According to the Court of the Lord Lyon Clan Membership goes with the surname. Clan Membership does not automatically pass through a woman who has changed her name in marriage and through to her children - thus children are members of their Fathers' Clan. Although, today many people who do not bear a Clan surname do wear Crest Badges of their mother's Clan, and anyone who offers their allegiance to a Clan Chief is a member of a Clan (unless the Chief decides to refuse that person's allegiance). Many people bear names that, while not actual Clan surnames, are sept names or associated names of certain Clans. Surnames such as Smith, Wright, Fletcher, and Miller are examples as such names that are associated names or many Clans (as every Clan would have its own s Smiths, Wrights, Fletchers and Millers). It is up to the individual to explore their personal ancestry and discovery the correct Clan that they belong to.

Clan Chiefs may wear their crest simpliciter that is without being encircled by the motto and without any feathers. It is more common, however, for Clan Chiefs to wear their own personal crest within a plain circlet inscribed with their motto or slogan. The Chief's Crest Badge does not contain the strap and buckle that a Clan is entitled to wear. Clan Chiefs are also entitled to wear three eagle feathers behind the circlet of their Crest Badge. On certain occasions, such as Clan gatherings, it may be appropriate to use real eagle feathers. Clan Chiefs that are members of the British Peerage are entitled to wear the appropriate coronet above the circlet on their Crest Badge, though this is a matter of personal preference.

In terms of Scottish Heraldry, an Armiger is someone who has registered his or her own Coat of Arms, or has inherited a Coat of Arms according to the Laws of Arms in Scotland from an ancestor who had arms recorded in the Lyon Register. Armigers, like Clan Chiefs and Chieftains, may wear their own personal crest within a plain circlet inscribed with their own motto or slogan. Armigers are permitted to wear one silver eagle feather behind the circlet (or on certain occasion a real eagle feather). If an Armiger is a member of the British Peerage, he or she is permitted to wear the appropriate coronet above the circlet on their crest badge. If an Armiger is a member of a Scottish Clan he or she may wear the Crest Badge of their Chief, however it must be encircled by a strap and buckle. 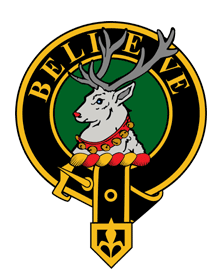 Clansmen and Clanswomen are considered to be relatives of their Clan Chief. They can be either immediate family or extended family. Clan members can also be people who only bear the "Clan Surname" or a sept name associated with the Clan. Anyone who professes allegiance to both the Clan and its Chief can be considered a Clan Member. Clansmen and Clanswomen may wear the Chief's Crest encircled by a strap and buckle inscribed with their Chief's motto or slogan. The strap and buckle symbolizes the Membership to the Clan and allegiance to the Clan Chief.

A crest stands above the wreath which stands above the shield in a coat of arms. It is impossible to own a crest if one is not in possession of a coat of arms, as the crest is adjunct to the coat or arms. In Scottish Heraldry the crest is usually accompanied with the motto or slogan, and sometimes an additional motto or slogan is granted which may also appear on a clansman or clanswoman's crest badge.

The wreath appears on a coat of arms between the crest and helmet. When on a crest badge, the wreath is always shown below the crest to show that it is a heraldic crest and not another object.

In some cases, the heraldic chapeau replaces the wreath in crests; it can also sometimes appear between the wreath and the crest. The chapeau indicates the owner's baronial rank.

This is just a very brief over view of a very complex structure of rank within the Clan Society. There are many online sites and books available on this subject. Our source of reference for this page is from Wikipedia, The Free Encyclopedia online at:

For more detailed information, we suggest that you visit: The Court of the Lord Lyon King of Arms - The Official Heraldry Office for Scotland. The Court of the Lord Lyon is the Heraldic Authority for Scotland and deals with all matters relating to Scottish Heraldry and Coats of Arms and maintains the Scottish Public Registers of Arms and Genealogies.