A Scottish Christmas Tale of The Clan Claus

A long time ago, when Santa Claus was just beginning to explore the world, he would harness up two of the reindeer up to a small sleigh and would travel looking for towns and villages that he could add to his route on Christmas Eve. On one such journey he was flying high in the clouds when he heard the most unusual sound.

BLAAAAAA, BLAAAAAA, BLAAAAAAA, Now what could that be? Santa wondered aloud. Let's go have a look Dasher and Dancer, so turning his sleigh they headed down through the clouds and into a small forest of trees. Santa stepped out of the sleigh and said, "Now you two stay here and don't let anyone see you." 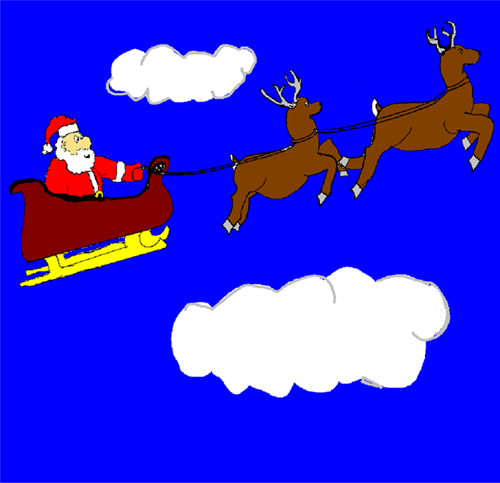 I wonder if it is some kind of strange new animal thought Santa. I have never been in this part of the world so who knows what wonders and mysteries are waiting to be discovered.

Stepping forward, Santa noticed a strange shadow. It had what seemed like a larger head, with three horns on its back, it also seem to have a strange shape body that look something like a bell with two legs sticking out in the middle! BLAAAAA, BLAAAAA, BLAAAAA Though frightened at first, Santa's curiosity grew stronger so he continued forward.

As he came around the big rock he was very surprised to see that this was not a monster at all but it was a man with a bright red beard, holding a strange looking instrument, while wearing a big hat and a very colorful outfit. 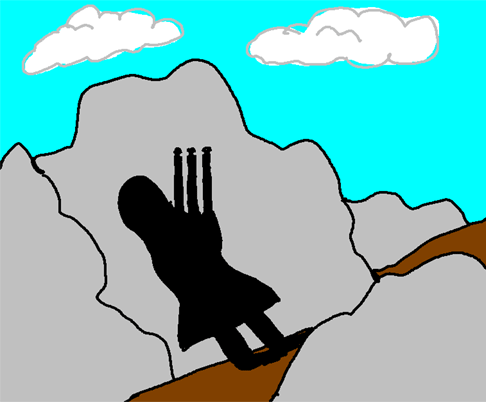 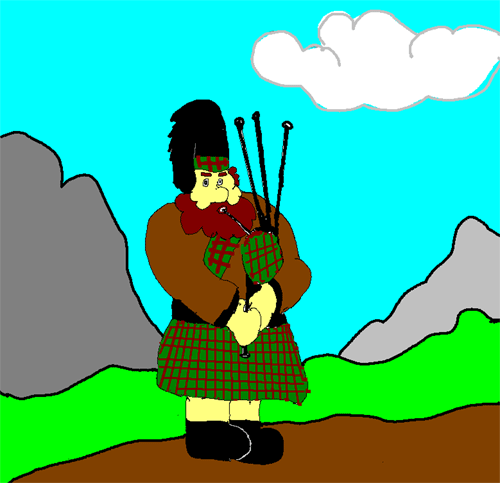 When the man spotted Santa he immediately said, "Guid mornin, and who might ye be?" Ho! Ho! Ho!, my name is Santa Claus" responded Santa. Well I'm pleased to meet ye, ma name is Duncan, and a'm of the Clan MacGregor.

Santa Claus ye say? I donna believe I have ever heard of the Clan Claus before, so I am guessing ye not from around here are ye? Asked the man.

No, this is my first time here, replied Santa.

Well welcome tae Scotland Mr. Claus, said Duncan as he shook Santa's hand. Duncan went on to explain to Santa all about Scotland. He explained about his outfit which was called a tartan and kilt, and how the colors represented what family he belong to which is called a clan. Then he showed him his musical instrument called a bagpipe, this was what made the sound that Santa had heard. Santa was fascinated by this instrument, because you first blew air into a bag, and then by squeezing the bag the air will fill the pipes and make the sounds. Duncan gave him a demonstration and this time round the sounds that came out were very beautiful. 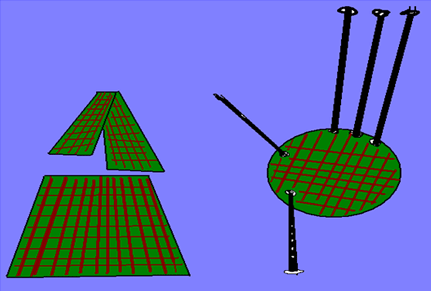 Do you know any Christmas Songs? ask Santa.

You have never heard of Christmas! Oh my, I must tell you all about it, remarked Santa. So he told Duncan the reason for the season, about the special gift of God's love and the birth of his only Son. He went on to tell the story of manger and gifts of the three kings. Santa then explained that he gives gifts to show his love, and that is why on Christmas Eve he brings toys to good boys and girls. 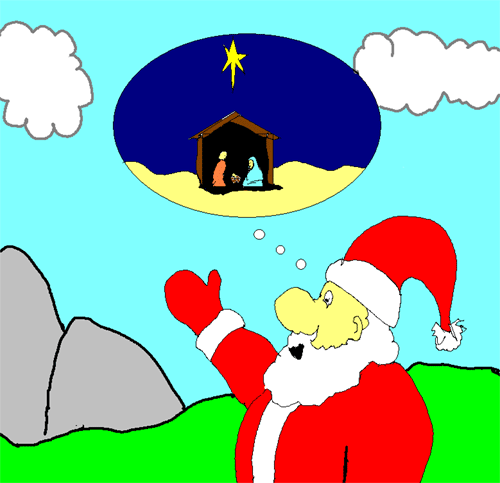 Duncan was very impressed with this story and said he would very much like to celebrate Christmas. Santa told him that he was going to put down Scotland on his map and make sure he visited. Duncan said, at would be wonderful, but I must warn ye, that it can be very dangerous, especially at night when the fog comes in, there is a monster in the loch.

A m-m-monster? Santa stammered. Ay, it's a bit of a sea serpent, she stays at the bottom mostly but has been known to jump up out of the water and steal from anyone passing by, the monster was believed to have an underwater caved filled with treasure and so most folks are so afraid of ye creature they will not come out at night at all.

In fact tis one of the reasons folks don't come to Scotland. I'm guessing that's the reason we have not yet heard of Christmas till now, Explained Duncan.

Well can anything be done about this? Inquired Santa. Well the serpent lives under the water so there is no way to get to her. Thaur only be one other creature that can go from on the land to below the sea, and that be a Kelpie, but they can be almost as dangerous as the serpent.

Ye see a Kelpie is a water horse, on dry land they look and act like a horse but when in the water they can swim and breathe underwater. If ye are riding on a water horse ye must be careful not to go into the water or ye might drown, Warned Duncan.

Duncan then took Santa into the village to meet his family and be introduced to his Clan Chieftain. Santa was greeted warmly by Kevin MacGregor and his wife Ginny. They were very happy to learn about Christmas and proclaimed that it would be celebrated every year, but they understood if Santa could not come because of the monster. Santa was very happy with the new friends that he made but he was trouble by the thought of having to stay away because of the monster. As he was sitting down listening to the beautiful bag pipe music he got an idea. Duncan can I borrow your bagpipes and can you take me to see a Kelpie? Inquired Santa. Aye, but what would ye be wanting to see a Kelpie? I told ye it was dangerous. responded Duncan. Ho!Ho!Ho! Have no fear, my friend, I have an idea.

Within moments, Santa and Duncan had arrived at a grassy field. In front of them, a brown horse was eating some grass. Thaur be one, I have seen it jump into the water many times and go to the bottom of the lake, remember what ever ye do, do not ride this horse, Cautioned Duncan.

Santa took the bagpipes and left Duncan watching from a distance. When he came up to the horse he said, Hello, I am Santa Claus, and who might you be? My name is Fury responded the horse. Well, Fury would you like a candy cane? They are delicious. Fury walked up and took a small bite from the candy cane. He enjoyed it so much Santa gave him two more.

Then Santa asked, is it true that you are a water horse?

Neehhh, Yes, I am, and what can I do for you? said the horse. Do you know where the Sea serpent lives? Could you take me to her? Asked Santa. Yes, I do but I don't think you would survive her cave is very deep and you could not hold your breath long enough. If I promise to bring you more candy canes would you take me down to see her? asked Santa.

You are a very nice man, and I do enjoy these candy canes, if you want to go I will take you, but your going to have to hold your breath for a long time, said the horse. Before getting on the back of the horse, Santa took the bag pipe and plugged the holes on the end of the pipes, then he blew up the bag as large as it could go. Then climbing onto the horses back, they both dove into the water. I see, said the horse your using the bag pipe filled with air to breath underwater. 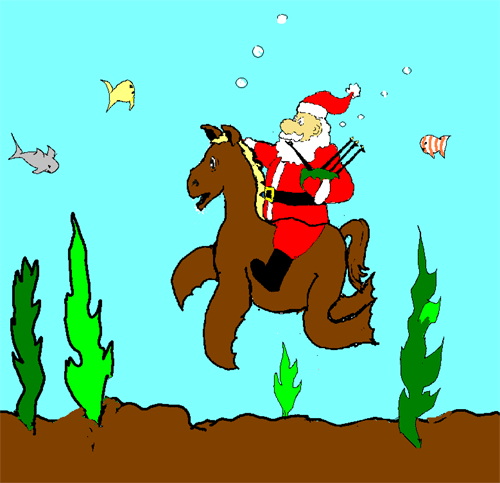 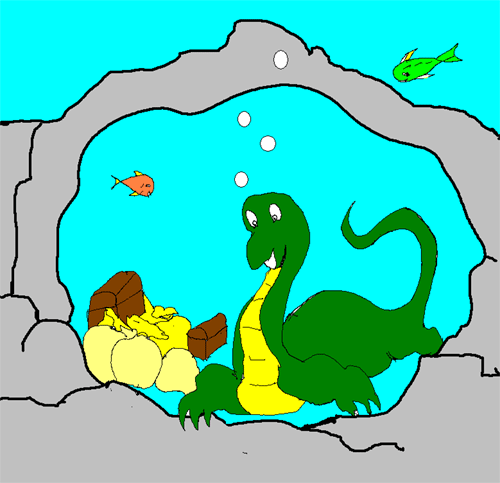 Down and down they went until they came upon the opening of a big underwater cave. Inside Santa could see what looked like large sacks filled with gold and treasures of all kind, and on top of them was a rather large sea serpent. The Serpent opened its eyes, and blinked twice with surprise because she had never had a visitor to her cave before.

Santa took a deep breath from the bagpipe, and said, Hello, my name is Santa Claus. Oh what a pleasant surprise. Responded the serpent with a smile, I have never had a visitor before, do come into my cave.

Once inside Santa found that part of the cave was actually dry and had air to breath. This was good because it was difficult to talk underwater. So what can I do for you, Said the serpent. Well I came to ask you why do you steal all these things. Don't you know that stealing is wrong? inquired Santa. Steal? I did not think I was stealing, you see I am very lonely down here and when I hear people on the surface I come up to see who they might be and if we can be friends, but sadly they always do the same thing.

They throw up their arms and everything they are carrying, and run away as fast as they can. So I pick up the bags and bring them to my cave for safe keeping. I wish they would come back and talk to me so that I could return these items to them, I just wish I had somebody to talk to from time to time. Said the Serpent.

Ho!Ho!Ho!,Oh this has all been a misunderstanding, they were afraid of you but there really is nothing to fear. Santa explained to the serpent about Christmas and how he would bring toys to the good boys and girls, and told her how he would bring her a gift as well and would help her to make some friends by helping her return all the treasures to their owners.

So up to the surface they went, where they found Duncan standing on the shore. He was so surprised that he almost fainted. I can na believe ma eyes, I thought ye were drown, and I see ye have tamed the serpent as well. Santa explained that the serpent was really nice and only wanted some friends. So Duncan pronounced, that since it was Loch Ness, he would call the serpent Nessie.

She liked this very much and with the help of Dasher and Dancer and Santa's sleigh they were able to bring all the lost treasures to the people in town. 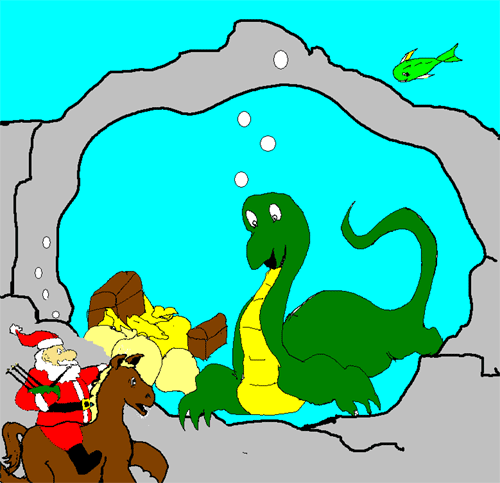 The people of Scotland were very happy and Clan Chief Kevin MacGregor said to Santa that Ginny MacGregor had made him his very own tartan and kilt. The different colors of the kilt each represented something special. First is green, that represented the color of Christmas tree. Second is red, the color of Santa's suit and his favorite color. Third is yellow, that represent the first gifts that Santa gave which were the 3 bags of gold he gave to the 3 daughters. Finally, the color white which symbolizes the snow of winter.

Kevin presented Santa with these gifts and declared that from now on he would be known as Santa, from the Clan Claus. So this is how Santa first came to Scotland and how he began his own clan. 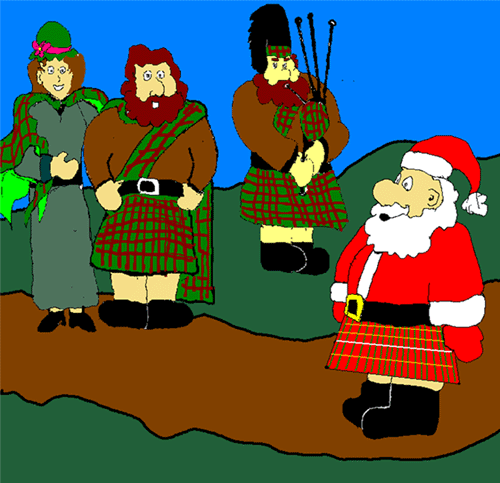